Rebuilt for Customer Laurie Watts. This engine arrived parted out with considerable damage to many components. Here is a brief on the process undertaken to build the engine and gearbox. 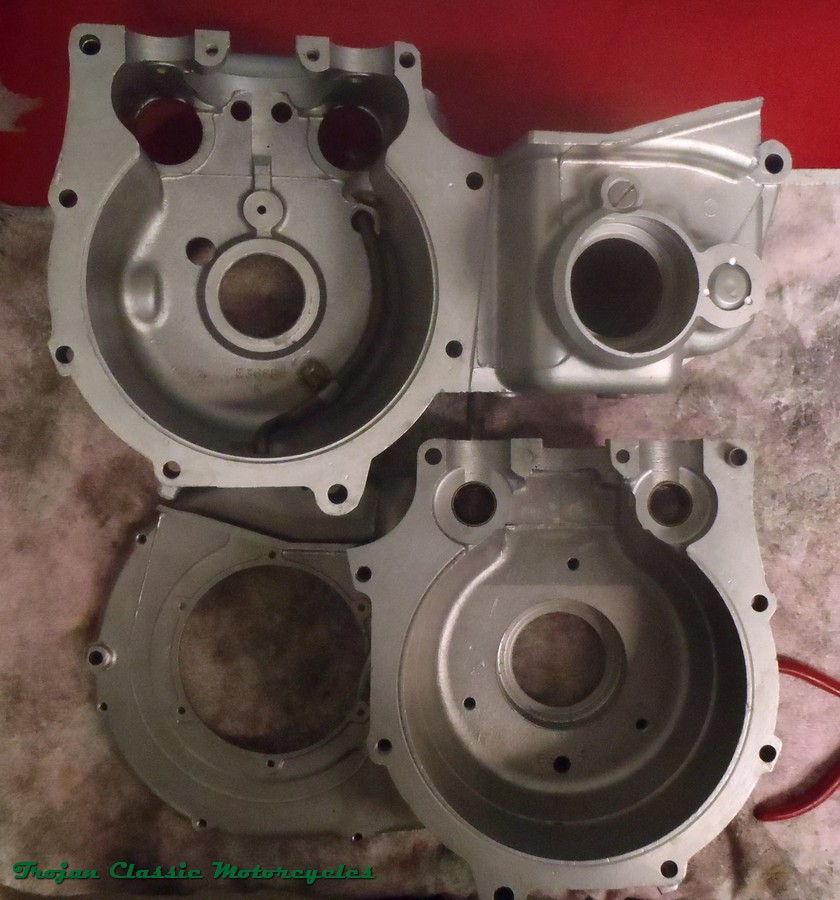 Sometime in the past a primary chain broke and damaged nearly all of the screw bosses. The drive side inner primary case (rear) was also slightly warped. On the timing side the gearbox cover bosses were also broken along with some of the timing cover face bosses. This part of the job requires specialist equipment so Laurie outsourced the job. Once the primary was straightened and bosses filled with alloy weld, the surfaces were re-faced and the threads re-tapped. The only issue we had with this is that notes were not taken to tell us how much surface was removed from the faces. The problems faced with the unknown will reveal themselves as the build progresses. The head and barrels were also modified in the past with a crude attempt to make this a nine stud set up. Again these problems will be rectified as we build.

Laurie sourced a NOS crank which was in excellent condition. We chemically cleaned the crank and conrods, checked and linished journals then balanced rods, pistons and crank.

Rocker boxes cleaned and components inspected and replaced where necessary. Both assembled and bagged.

Crude repairs and modifications in the past have come back to haunt this engine. Miss-aligned head bolt holes will not match the head so we modified the head to suit. Why not get another barrel? Well that would be the first thing you should try to do when faced with these issues, but we will step back a moment and explain. The head and barrel where actually sent to us on separate occasions previously to be reconditioned. It was not intended for us to build this engine. The head was a straight forward reco; Hydrotech clean faced with new valves, guides etc. The barrels were chemically cleaned bored, honed, decked and painted. So in essence we were not aware of things to come without having seen all components together.

After modifying the head, all the head bolts are numbered and now belong to there allocated holes. We bench test and fit the rocker boxes, head and barrels to make sure we're all good. Time consuming exercise but worked out well.

Timing, primary and high gear bearings fitted to cases. We now dummy fit the cases together and check alignment as we prepare to install the crankshaft.

The crank is test fitted to the cases and checked. We are happy with it's operation and proceed to test fit the cams. They are also working in their bushes smoothly. We are now ready to seal the engine cases. The timing gears are next. after fitting the cam gears we noticed some slight resistance when we turned the cams. We removed the cam gears and found that the cam plate retaining countersunk screws supplied with this engine were rubbing on the back of the cam wheels. Luckily we had some genuine new old stock screws and were able to compare. The difference can clearly be seen in the second last two pictures above. The screw on the right side of the cam retaining plate is non genuine.We replaced the inferior copies and fitted the gears without issues.

After the crankcases are assembled we usually fit the barrels and head, but with this particular engine we decided to do the gearbox and clutch first. Because of the repairs to the gearbox and primary sections we wanted to make sure the gearbox will function correctly. The last thing we want is to fit the top end only to find we have to strip down the entire engine because of unforeseen issues the with the gearbox. The inner and outer gearbox covers are now assembled and the gear components ready to fit.

Major hurdle to contend with as we mentioned at the start. Not knowing how much of the mating surface between the gearbox case and the inner cover was removed. This means we have to set the end float as required and work out the spacing to achieve it. This process took considerable time as we used thickness gauges to work out where we need to be for the gears to operate smoothly. We worked out what amount was missing from the face and double checked the engagement of all the gears.

An alloy spacer was fabricated using the gasket as a template. We tested the gearbox one more time and it worked well.

Another unforeseen but not too major problem was excess alloy weld on the primary side where the chain adjuster sits. We covered the engine completely accept for the area in question and proceeded to remove the alloy. We also fitted a new clutch and primary chain.

The pistons are now fitted to the conrods and the barrels are ready to go onto the crankcases. The head and rocker boxes are next which will complete the top end.

We finish off the primary side with the rotor, stator and clutch plates.

This engine is now ready for Laurie to collect. Once fitted to the motorcycle it will need to have the clutch cable fitted and adjusted.